Disclosure: In this instance, my actions brought me to the officers’ attention.

I finally managed to get a vehicle, and it was a humble little compact. A friend gave it to me after an accident because they could not have sold it. It was a two door vehicle, with the drivers’ side door smashed in. I named him “Auron”. Additionally, he was a manual, and most folks would not want such a beater AND a manual. I was fine with both. I used my car as a mobile base, and was prone to cleaning it out throughly once a week. The detritis of the last several days was strewn about. Several sets of clothes, a variety of different carrying bags, odds and ends. Additionally, I threw my bo staff and bokken, wooden training swords, in my car as well. The bo staff got jammed in the drivers’ side as it would be out of the way with the door not opening.

They used to be whole…

After a long week at work, I went to a park for a bit of a workout. Not knowing any katas or anything I just stuck to some basics. After about half an hour of a healthy sweat, and likely scaring folk, I packed up to head home. I had only been driving for a short while at this point, and uphills still gave me a good deal of trouble. The proper balance of acceleration without choking the engine sometimes eluded me. I had a bit of a habit of pushing a bit harder to compensate. I would avoid driving hilly routes especially during the day. Having people behind me made my brain think I had to move at a pace as not to slow anyone down. I also avoided routes with no passing lanes for this reason.
As it goes, all of these elements mixed together.
On a particular uphill I holding at five above the speed limit. But when I was no longer working against gravity my speedometer shot up. I already had my foot on the brake. While I did quickly return to a lawful margin of speed I saw a police officer with a radar gun pointed at the top of the hill. I let out a heavy sigh and hoped I had arrested my momentum swiftly enough. The officer did not seem interested in me as I passed.

This story likely would not be here if that remained the case.

The officer made his way down the middle of the two lanes until he was behind me. Not wanting to clog up traffic I looked for a place I could turn off. Once I did I moved forward enough so that no one would be surprised by either vehicle being there. This took a minute or so.
As with general interactions I was never walked through a primer for police interactions while being the driver. Even this wasn’t my first interaction as a driver, so I kept my hands visible. I already had my windows down as my car had no A/C. “Down” is only about 60~70% accurate, as the driver side window could not be lowered into the door as it was caved in.
Eventually, the officer made his way towards my vehicle. He peered in the backseat and then backed away. I heard him calling for additional units before he got back in the car. I looked back, and did not blame him. My bokken were laying out plain as day. And unless you knew what they were on closer inspection, they could just as easily be sheathed blades.
Two more squad cars arrived. One came from in front of me, the other from the behind. Even with my consideration, these cars now blocked the road. The two new officers took a position near a tree near the passangers’ door, and the original officer up to my window at this point.

He asked the usual. Where did I come from, where would I go? He was also perturbed that I did not roll my window down entirely. When I explained that I lowered it as much as I was able due to my door he looked to Officers B&C. Comparitively speaking, they were more at ease. Officer A was the senior in age by far, likely 55+ by my estimate, while I would not have put the others above thirty-five. B&C looked on and perhaps due to their apparant ease Officer A carried on.
He began asking me about the contents of my vehicle, which I explained. I assured him that all my items were training tools and made only of wood. He told me that I should not have weapons in arms reach while driving. I voiced finding it odd that he had a number of force options at the ready. I also stated that my tools would only be used if someone tried to physically extract on encroach upon my vehicle, and were thus “not meant for him.” Officers B&C found this to be somewhat humorous. Officer A was aggitated by their jeering.
Next, he pointed into the back seat and wanted to know about “that black thing”. The only object in my car that was not black was the bokken you can see above. I asked for clarification as to which object. He merely repeated “that black thing”. I looked to Officers B&C for some potential cue, but they could not tell what Officer A was asking about either. I asked for the general location (floorboards, seat, back windshield), I asked for what material the object looked to be made after, but each question gained the same response. After several minutes of the worse rendition of Who’s on first I decided to break the stalemate.

I announced to Officer A that I think I knew what he was talking about. I raised my voice as well as I could that I would be taking a hand off the steering wheel and reaching into the backseat and placing my hand on what I thought the focus was. In response Officer A took a few steps back, drew his firearm, and warned me to keep both hands on the steering wheel. This caused the Officers B&C to redouble their focus. One remained on the passengers’ side of my car, the other took a position in front of my vehicle. They did not draw their weapons.
I stated again that I did not understand the instructions as to what Officer A was referencing. I asked for further clarification, which gained a shouted reply of “That black thing!“. I restated my lack of understanding, and intended movement. When I took my hand off the wheel Officer A raised his weapon. It was not leveled at me. The whole time he is screaming at me to put my hand back on my steering wheel. I place my hand on a roll of material. It was squishy, spongy, and looked to be made of some variety of plastic foam. When I had an opportunity I asked Officer A as calmly as I could if this is what he was speaking about.
“Yes! That black thing!” came the clearest response I got to this point. “Now put your hand back on the steering wheel!” I announced my compliance and intended action as before. In as smooth of a rewind as I could I put my hand back on the wheel. Officers B&C relaxed nearly immediately. Officer A took some more time, but eventually holstered his weapon. They three were looking at me expectedly.

Officers B&C wholly lost their composure. They laughed hard enough that they need to brace themselves. One up against a tree, the other all but fell onto the hood of my car. Officer A turned completely scarlet and meekly demanded my license and registration. He took them and returned to his car. Upon his return he slipped them back through the window, along with the ticket, as aggressively as he could without a word. Officiers B&C gave me permission to go as Officer A seemed to be done with the entire situation.

My fear in the present climate is this: I can die due to a misunderstanding. Worse yet, if I am killed by a law enforcement officer, there will not be any sort of true repremand
As I said, the opening instance to this was completely my fault. I was speeding. I said as such to the officer, I held to such when asked, and I always include it in my telling of a story. Now, while I make light and laugh about this incident now, my fears are still genuine. When I see reports on the news of compliant civilians being killed, this is the memory I return to, relay to others, and that most resonates in the experiences of those that have fallen.

Let’s say I hadn’t made it out of this story alive. What would have set Officer A off?

-I physically couldn’t roll down my window entirely. That could be
suspicious or viewed as non-compliant if the officer thought I was being
dishonest.
-My tone. I had a long day. A long week in fact. I was tired, and my speech often has sarcastic notes to it. If he thought I was being glib or lippy it may have weighted the scales in my disfavor.
-The biggest place this could have changed was when I put my hand on the
yoga mat. The officer had specifically stated to keep my hand(s) on the steering wheel. I was not compliant when I removed it and set it on the yoga mat. If
the officer thought I was reaching for a ranged weapon or had become a
viable threat, he would have felt within his right to protect himself and
the other officers in using his firearm.

And the narrative of that? “A routine traffic stop turns deadly for one area man.” My friends and family would come out of the woodwork to extol my virtues. They’d talk of my potential and my dreams as they understood them. There would likely be silence and internal investigations from law enforcement. And the media would dig up whatever dirt they could to ensure I looked like a viable threat, likely using these pictures… 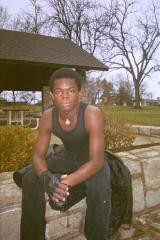 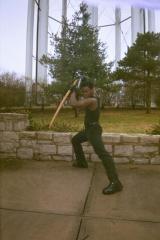 …because they can be spun in the most negative and demeaning light. Ah… hypothetical obituaries. What fun.

I said in a previous article that when it comes to encounters with police, I am not concerned with statistics. I am only interested in not dying. Whether reserved, concentrated, or interned, denying that minority populations have previously and are presently suffering does not negate the fact of the matter.
In hindsight, this is where my fear solidified of dying due to a police misunderstanding. Sure… I was speeding (even if I thought nature worked against me for that does not matter lawfully). But being in a pincer between one aggitated officer and two back up officers did not instill me with relief. Back up was wise. I would have likely done the same. However, the frustration I perceived led to limited progress.

Even after this took place in my life, I still looked at situations as my individual stories. I proceed with calm and understanding as well as I can. But then I hear of similar stories from others, but they don’t live to tell their side of it. It is easy to shape history when your voice is the only one.

1 thought on “Anecdotes of Blackness”