Seraph tossed out one of his nigh endless smoke bombs. He’d learned to change quickly behind the cover of the haze. It helped that the Abyssean clothes worn by Blue Mages on their side seemed to respond in reaction to his Blue Magic, crawling about per his magical will. This suited him well. There were blue decorations that stuck out of his new headpiece that he often used to confine his hair instead. He pulled the cloth tighter and enjoyed a more fitted look. Part of him felt sorry that the clothes made in Whitegate were not as durable. While harboring many other benefits, Abyssea was a rough world. He could make due without numerous enchantments. He’d come a long way and had many adventures, learned a number more spells, and reached even greater depths than he ever thought possible.
And, for whatever reason, Raubahn simply acted as though he didn’t know he existed. That was not all bad. He didn’t have to deal with his alter egos’ cryptic ways either.
He stood before a cavernous maw, the housing for otherwordly conduits, this one leading to Uleguerand Range in Abyssea. He entered, and went about his normal business. Aligning himself with this realm was the providence of the Conflux Surveyors, who were much nicer now that he could walk about on his own. His time with Moghat afforded him some Atmas, stone imbued with the essence of foes slain. Seraph often lamented he could not absorb their powers directly. Is more power really something he needs?
Well… couldn’t hurt…
Given a limit of two hours, Seraph began his wanderings. Divine beings, dark demigods, Terrestrial Avatars had fallen to he and his new friends. He learned to wield his powers to greater degrees almost daily, and the more he learned the more he was able to find useful. Now he sought the means by which to enhance his armor. No groups wandered about, which was more than a little odd. He didn’t mind. He did enjoy wandering the snow fields on his own.
After about an hour Seraph came to his usual stopping point. A large slope would drop unwary adventurers into the grounds of many Imps. From the days where he wandered alone through Mire and Reef, Seraph still loathed the little beasts. Seraph’s sensitivity to magical energy had increased, and he could tell that magic from the Imps lashed out. They were attacking something else. Whatever it was of a sentient race. The Beastmen did not roam here, so this left a few possible sources. After checking to make sure he had access to his Warp scroll should he need it, he tore down the hill. The hill was steep enough to be considered a wall by most, and definitely a one way trip by all. Seraph readied a spell that would strike an area around him and let him clear the area in the event the assailed parties below needed a breather.
Too much magic was flowing to get a clear view of anyone in who was a target. As Seraph reached the bottom of the slope he dove into the midst of the Imps’ spells, let fly a six-part attack, and kept moving. The surge of motion and magic turned against the Imps drove them away, most flying limply, others merely falling to the ground. Without the source, the magic died away.
Seraph thought it strange that there was no target. Imps are horrid creatures, but they don’t just attack without reason. If they were cold one would think they would all be lighting fires. Seraph turned to look at the direction of the fleeing Imps. Single minded, but not stupid. What had happened?
A thump behind Seraph caused him to turn around again. At the focus of where the spells would have been thrown stood a Dragoon. At least, Seraph thought it was. The difference in armors for Abyssean Blue Mages and those of Vana’diel were starkly different. This armor looked as though it had grown from the suit Seraph had attributed to Saint.
“Hm… Was that all they had…? Worthless!”
…that voice… Seraph began to undo his headdress. Why he pulled this thing so tightly…
From high above a screech resounded. “Sorry Lumi… I suppose jumping the slope does give the Imps enough time to get bored.”
Lumi? That’s two…
At this point the Dragoon took notice of Seraph. “Oh… Hey there. Wait… you’re a Blue Mage aren’t you? I’ve been seeing a lot of you around lately. You wouldn’t be familiar with anyone named…
Seraph finally got his headwraps loose enough to reveal his face.
“….Seraph… would…?”
Seraph smiled.
“You?” Lumiere screeched and tackled the Blue Mage.
“I can’t believe this.” The Dragoon removed his armet.

The two old friends, now both hardened fighters, had met each other a world apart from their home, less mentor and student, but as equals. Saint mimicked Seraph’s smile. It had been too long since either had seen the either. Where to begin?
The Imps, returning with help, decided that. They began charging spells to wreak the vengeance from afar. At that moment the flash of dark steel descended from above. Power arced out from the point of impact and once again, the Imps scattered.
Rai, of no surprise to either of his friends, had found them and came out sword first. Saint laughed, looked to Seraph, who shook his head. One can always trust Rai to be Rai, and Rai is at least in part the sword he bears.
The Imps had fallen back to their leader, who was larger and more grotesque than all the rest. Saint replaced his armet, Seraph rewrapped his headdress, and Rai slung his blade over one shoulder. The Samurai made his way back over to the duo.
At the leaders’ direction the numerous Imps surrounded the group of four. Saint looked to Lumiere, and as one, they readied their spear and breath attacks. Rai put a hand on Saint’s shoulder. The Samurai’s relaxed stance confused the Dragoon. Rai nudged his sword in the direction of their Blue Mage companion.
Seraph was walking towards the leader on his own. Saint hadn’t been around for all the battles that Seraph had been through, hadn’t seen how quickly he clawed his way up to the plateaus of his two friends, and how he excelled in his own ways. Even Rai didn’t know Seraph’s depths. However, Rai felt it was time for Saint to sit back and see what Seraph could teach. The Imp leader flew high into the air, only for Seraph to meet him and smack him back down to earth. Calling for resonance Seraph then focused a three pronged attack through his blades. Like when he put down Raubahn, the power of Light surged forth bringing a swift end to the Imp leader.
Saint relaxed a great deal. The young Elvaan, who he brought out of his wooded home, had become the embodiment of a Beast from the Near East. A wave of incensed Imps came up behind Seraph, and Saint let out a shout. Seraph expected this. A crushing wind blew against Rai and Saint, the snow blinding. The two fighters in their full helms could look through the storm. At the middle stood Seraph, electricity jumping from snowflake to snowflake as it passed by. Reaching deep, he gave himself over to the Beast, allowing the it to strike fury on their aggressors. Not to be shown up, Rai, Saint, and Lumi joined the fray for the first of many more struggles to come.

And so, reunited, Saint, Seraph, and Moghat went on to see all Vana’diel had to offer. 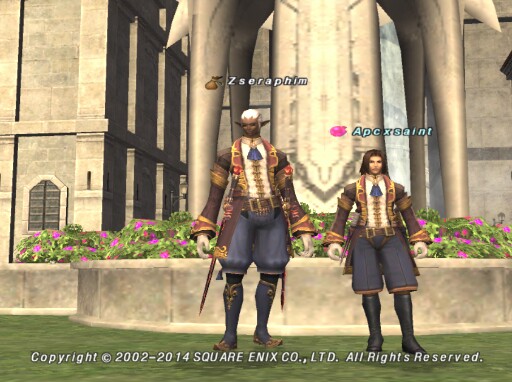 …but as all good things, the stories came to an end. It is believed that some adventurers passed on into another realm where their stories continue. Some in Moghat went to the Far East, continuing their fighting and training in the land of Reisenjima, happy with the dojos of that land. Others simply hung up a “Gone Fishing sign.”

Onyxmoon, steady as the tide, can still be found crafting all manner of goods.

But what of Seraph?

Occasionally, Onyxmoon will hear a humming across the linkshell. He’ll hear tales of massive amounts of moat carp and Alexandrite turning up in the hands of interested parties.

In truth, the last that anyone knew, Seraph had delved into the Underworld itself seeking out souls that would grant him more power. 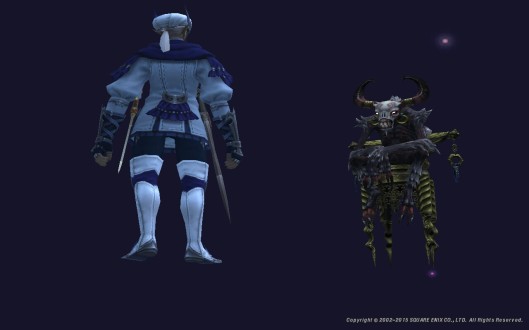 He rests in the Walk of Echoes, finding power and knowledge from all dimension. Atomos appreciates hunger, and grants Seraph insight into All That Is, All That Once Was, and All That Now-Shall-Never-Be.

What does Seraph gain from this ceaseless mediation?

Those are tales for another time.

Marks of the Beast
Finish